To kick start my trip back home a few of us partook of the New Orleans festivities. I had been waiting for this for a looooooong time. 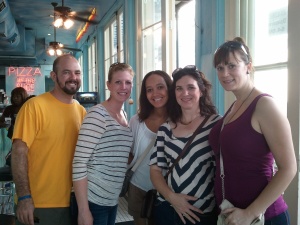 The day started at 10 am. We stopped in Des Allemands (dez almonds) for a Frank’s bloody mary. Some of us got one while others got something else. They’re famous for the tomato-y drink.

Once we got to the French Quarter we had lunch at Yo Mama’s. My friend has been telling me how great the peanut butter burger was and I had to try it. A little peculiar…putting peanut butter on beef, but let me tell you…AWESOME! There’s something about the creamy texture and salty but slightly sweet taste. You have no idea. Try it. 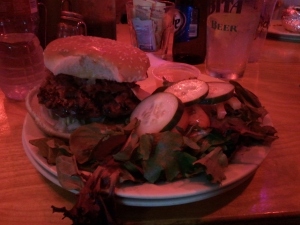 We went on walking around the Quarter and got to Lafitte’s. Every cool celebrity you can think of has visited there. Scarlet Johannson. Nick Cage. Dan Aykroyd. And my own personal fav, Jason Segel. So I took my picture next to them. 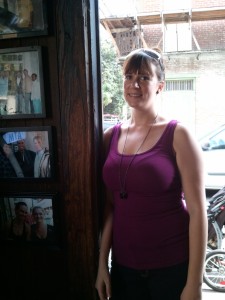 What I love about most of the places in the French Quarter and Bourbon Street area is the ambience. There are a lot of dungeon-y type places where it’s dark and dirty and you can barely make out the color of your food. There are spider webs in the corners and wood everywhere. Friendly people all over the place. There’s really nothing like it.

We occasionally stopped and watched a street performer, both adults and children. People usually want to you stop and drop a few bucks in their oyster bucket, guitar case or hat but I get the sense that they also do it because they love it.

For a snack (big snack) we stopped in at Crescent City Brewhouse where we knew the oysters would be great. Only eat oysters in the months that end in -er. We got Oysters Three Ways. Asiago, crabmeat and spinach. Yum. 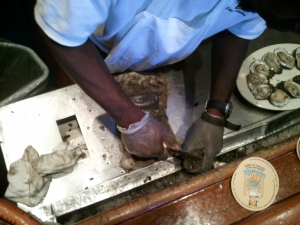 They brew their own beer there and I decided on the Weiss. Sort of Blue Moonish.

Then there was the Almond Fruit Basket. Sigh…… 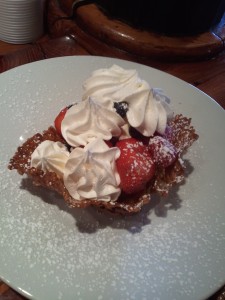 We finished the night at Coyote Ugly. You all know what happens there. If you don’t, watch the movie.