Pinterest is my new best friend. The ideas are endlist. A lot of people joke about how Pinterest contributes to hours and hours of mindless surfing without ever really accomplishing anything. I am proud to say…that’s not me. My list of “have to try’s” is growing longer and longer. I hope to catch up and blog to you over my Thanksgiving holiday.

Preheat oven to 350 degrees. In a large bowl, mix both cheeses, sugar and vanilla until smooth (I suggest a hand mixer). Unroll and spread 1 can of the crescent rolls as the bottom layer on an ungreased baking sheet. I used my hands and fingers for this. Spread filling mixture to the edges. Unroll and spread the second can of crescent rolls as the top layer and lay on top of the mixture. Spread melted butter over the top and sprinkle with cinnamon and sugar. Bake for 20-30 minutes, until golden brown. 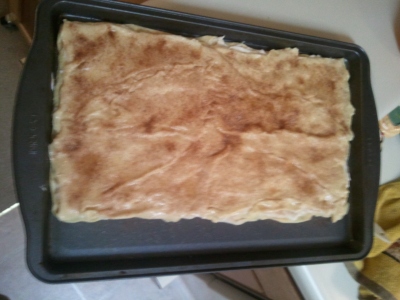 I had some filling leftover but I could’ve used it all. I chose to go thin.

I also had some stovetop potpourri going. I used the peelings from 2 oranges, 1 cinnamon stick, a little pure vanilla extract and a little nutmeg. Simmer on the stove.

Hope you like the sopapillas. I enjoyed them so much with my Holiday Nog. I had seen Bolthouse Farms advertise in my newly delivered Everyday Food Mag yesterday and I couldn’t wait to try it. Perfect excuse. Sopapilla Cheesecake.